What is Grid Parity?

Posted By SunPower by Green Convergence

Whenever you read or hear about solar energy, the topic of grid parity is one that is consistently brought up. Most recently, Vishal Shah, trusted Deutsche Bank analyst, released his 2015 report on the future of solar energy, claiming solar will reach “grid parity in most of the world by the end of 2017”(1). This is huge news for the solar energy industry and consumers alike. But, why?

What is solar grid parity?

What exactly is grid parity and how will it effect the average Santa Clarita home or business owner? 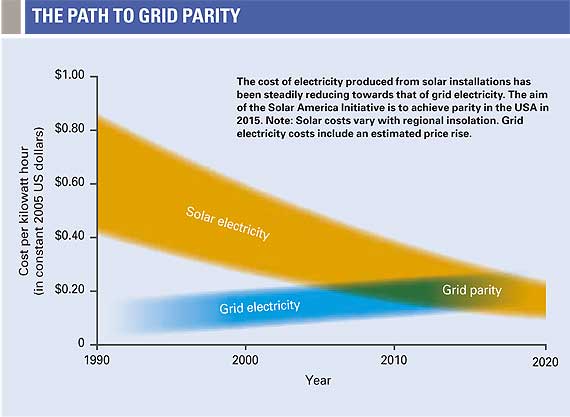 Grid parity refers to “the point in time, at which a developing technology”—in this case, solar— “will produce electricity for the same cost to ratepayers as traditional technologies”—the electric grid. If Vishal Shah’s estimations are correct, that means there will be no price difference between powering your home with solar energy and powering your home through the grid in just two years. That may seem like a crazy timeline but the pricing trends of both solar and traditional electricity do support Shah’s theory.

According to the US Energy Administration, the cost of traditional energy rises about 3 percent per year (3). Simultaneously, the cost of solar decreases every year and will drop another “40 percent over the next four to five years” (1). These numbers certainly back up Shah’s thesis that the majority of the world can easily reach grid parity on Shah’s schedule, benefiting communities worldwide.

In fact, solar electricity in the US—without solar subsidies—costs 13-23 cents per kWh, a cheaper rate than that of traditional electricity in many other parts of the world (1). That’s a huge deal. Experts say it will only get cheaper as “the cost of financing will also fall” due to the improvement of existing business models and steadily decreasing “customer acquisition costs” (1).

It would seem that global solar energy adoption is inevitable—from a price perspective—and coming fast. Of course, for households who have electric bills under $150, solar is not yet fiscally worthwhile. But for anyone whose bills are above that $150 benchmark, solar energy is billed at a fixed monthly rate—making it a much better bet than the constantly rising cost of traditional electricity from your local utility company. So, if you haven’t already, plan for future utility price hikes and look into solar for your home or business today.