Net Metering: What is it and why should you make the switch today?

Everyone hates getting their electric bill. But homeowners in places like the Santa Clarita Valley and the rest of Southern California, where temperatures are high almost year-round, have the most reason to worry. Local utilities charge customers in these areas nearly criminal rates to keep their homes cool and the prices just climb every year.

If you’re already a solar homeowner, you’ve probably heard of net metering. But you may not know what it means.

What is Net Metering?

Net metering “is a billing mechanism that credits solar energy system owners for the electricity they add to the grid” (1).

How Does Net Metering Work?

If you are on a net metering plan, whenever your solar panels generate more energy than you use, it will be fed back into the grid system. The utility company then compensates you for the power your system has generated. When this happens your electric meter will spin backwards, “providing a credit against what electricity is consumed at night or other periods when your home's electricity use exceeds the system's output” (1).

With net metering, you are only charged the difference between the power you use (when your system isn’t generating electricity at night) and the excess power your panels generate (during the day)—your home’s “net” power usage. This is great news for solar homeowners and all their neighbors. Solar homeowners get credited for making the money-saving switch to solar while their neighbors benefit from the extra power they’re pumping into the grid. The more solar homeowners on net metering plans, the more power there is on the grid, which will eventually lower the price of electricity.

What Does This Mean for the Utility Companies?

Sadly, this consumer benefit makes utility companies nervous. They fear that if many solar homeowners make this smart switch to a net metering plan, they will lose substantial revenue. And, they’d be right! 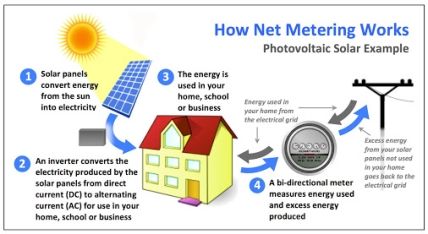 That’s why they are in the process of pushing legislation through to limit and eventually stop the net metering program. But this will only affect homeowners who don’t get on a net metering plan before the utilities meet their 5% Net Metering Cap, which could potentially happen sometime in 2016 (2).

*If you would like to fight against this limiting legislation, please write your Senator(s) and Congressmen about it and stop utilities from inflating their prices.

If you make the switch to solar and ask your utility company to put you on their net metering plan before they reach the Net Metering cap in 2016, you can benefit from unbeatable savings before it’s too late.

So set yourself free from the utility company this season with the power of SunPower solar panels, installed by the licensed roofing and electrical experts at Green Convergence!