Many have heard of the Solar Investment Tax Credit or ITC. It’s been all over the news and ads since its implementation in 2006 (1). But many may not know exactly how the Solar Tax Credit works. And, even more may be unaware of its profound effect on the solar industry in Santa Clarita and across the country.

What is the Solar Investment Tax Credit (ITC)?

The ITC is a federally-funded 30% tax credit given to home and business owners who choose to put solar on their roofs (1). Originally set to expire December 31, 2016, the credit was thought to be a short term solution to encourage Americans to make the switch to cleaner, cheaper and more efficient energy (1) This decision was made because solar isn’t just budget-and-environmentally friendly. Solar homes and businesses relieve the stress on our aging and overburden electrical infrastructure, reducing the risk of outages for entire communities. 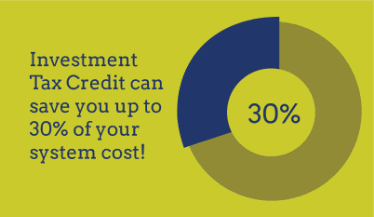 Why was the Solar ITC extended?

What are the benefits of the ITC extension?

As political turmoil continues overseas in oil rich areas, the necessity for US energy independence becomes more and more important. With the help of the ITC extension, “approximately 98 GW (gigawatt) of PV (photovoltaic solar cells) and 2 GW of concentrating solar power (CSP), [totaling] 100 GW of solar energy capacity”, will be installed in the United States by the year 2020 (1). In layman's terms, that’s enough energy “to power more than 20 million US homes” (1). This will likely help to solidify America’s political and economic stability for decades to come as far as energy is concerned.

Though many American industries have experienced slow—or worse—negative growth in the past decade, the solar industry has exploded. According to The Solar Foundation, 174,000 new jobs were created in the solar industry from 2010 to 2014 (3). With the ITC extension, those job numbers will continue to grow. According to recent estimates, the extension will create “220,000 solar jobs “ over “the next five years” (1). This will double the amount of solar workers currently employed in the US (1).

The solar tax credit makes solar more affordable for home and business owners alike! And, once the solar is installed, the monthly savings increase!

When will the ITC expire?

The renewed ITC of 30 % for both residential and commercial solar projects will only last until 2019. After that, it will incrementally decrease until 2021 (1).

So take advantage of the kindness of Congress. Use your solar tax credit before 2019 and make the switch to solar with Green Convergence, your local solar installer. Give us a call or click today at (661) 294-9999 or greenconvergence.com.