Solar is spreading like wildfire across drought-starved Santa Clarita, Los Angeles and California in general. Due to the abundance of California sun, panels are popping up on your neighbor’s roofs and more solar panel-powered utility plants are being integrated into our grid systems everyday. Similarly, our

great state’s desert neighbor, Nevada, is quickly jumping onto the solar bandwagon with a little help from, our partner, SunPower.

Unlike many foreign solar manufacturers, US-based SunPower has worked hard to receive Cradle-to-Cradle certifications—ensuring their products and processes are environmentally-sound. What also sets SunPower apart is its ceaseless effort to bring affordable solar energy to everyday and low-income Americans. Their latest exciting step towards achieving this goal is the recently announced, “100 MegaWatt solar panel installation for NV Energy” in Boulder City, Nevada (1). 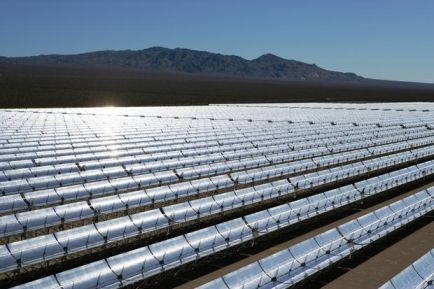 The deal consists of a “20-year Power Purchase Agreement” (1). A Power Purchase Agreement is a deal in which a solar supplier (SunPower) “designs, permits and finances the installation of a solar energy system”, or in EV Energy’s case, a solar power plant, “at little to no cost” to the client (2). This means EV Energy will be charged per kiloWatt hour by SunPower, instead of having to pay for the system in full.

SunPower CEO and President, Tom Werner claims that this project will help many Nevada home and business owners harness the power of the sun—their dry and sunny states’ most abundant resource (1). Warner claims this project’s existence is the direct result of solar panel power coming closer to grid parity, or rather, becoming more “cost-competitive with...traditional, fossil fuel burning plants...” (1).

To date, SunPower has built three plants in Nevada, two of which power US Air Force bases. But these plants don’t just make energy. This project with NV Energy, deemed “Boulder Solar”, to be completed in 2016, is estimated to create “200 jobs” and “power 15,000 homes” (1).

This is just one of many solar plant projects SunPower is working on across the United States. As one of the few American companies in the solar panel game and the manufacturer of the most efficient panels on the market, it’s clear why SunPower is becoming so popular among cities, schools, utility companies and homeowners as a solution to their solar problems.

So if you are thinking about making the switch to clean, money-saving solar energy, consider SunPower, the best in the business.